The History of the Dudes & Dolls Square Dance Club 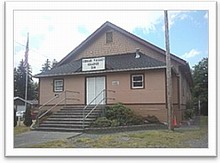 Cedar Valley Grange
A special thanks to Csaba Orban for researching these dates and facts.

Every year the Dudes & Dolls celebrate their anniversary but very few know about the history of how this wonderful club got started.

It began in 1948 when a caller by the name of Jack Hartley started the “Texas Squares” at the Ballard Field House. Three years later, in 1951, sixteen couples from that group moved to Riggs Hall and formed the Dudes & Dolls. A year later they joined the Central Puget Sound Council. The council required clubs to have officers so Carl Wheeler was the club’s first president from 1953-54.

Over the years the Dudes & Dolls danced in seven different halls but eventually, in 1967 – 5 years after the construction of the Space Needle and the opening of the Seattle World’s Fair –the Dudes & Dolls moved to the Cedar Valley Grange.

For 19 years, the Dudes & Dolls wore their green caravan outfits to dances but in 1977 they changed their colors to the now familiar black & white with the women wearing polka dot skirts. Only minor changes have been made over the years. You must admit, the Dudes & Dolls still make a striking appearance wherever they go.

Many of you know Debbie & Paul Taylor, our cuers and local round dance instructors. They joined us as cuers in March of 1984.

In 1989 we transferred from the Central Puget Sound Council to the Mount Baker Council. For the various individuals who attend their meetings, this gives you a little perspective as to how long we’ve been there.

Up until 1994 the Dudes & Dolls were, apparently, without a logo so one was designed by John Boor.

In 2000, Scott & Debby Slocum were hired as caller and were very well liked. The club enjoyed his calling for 7 years until Scott decided to retire.

Guest Callers were contracted in 2008 and 2009 while the club looked for a new caller. In 2010, Scott Coon was contracted and is with us currently. Besides calling, he also teaches classes and entertains us with his excellent Elvis impersonations.

From the simple beginnings of 16 people in 1951 to over 70 members in 2019, the Dudes & Dolls continue to be one of the best square dance clubs in the Puget Sound area.
Copyright © DudesAndDolls.Org